UNDER A SILENT MOON by Elizabeth HAYNES (a review) 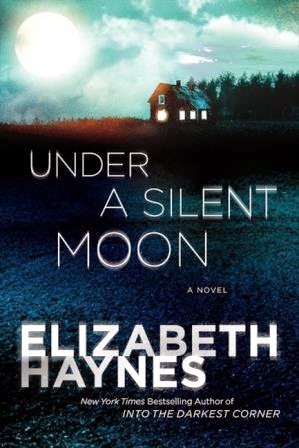 (This review is part of a TLC Blog Tour; I've just realised that I'm posting this one day late, so I apologize. Very sorry!).

Polly Leuchars, 29 years old, is found dead in a cottage, so badly beaten that part of her head is missing and there's blood everywhere. On the same night, not far from there, at the bottom of a quarry, the body of Barbara Fletcher-Norman, 58, is discovered in her car. Polly and Barbara knew each other; they were practically neighbours. Polly's blood was found on Barbara's clothing. When learning about his wife's death, Brian Fletcher-Norman has a heart attack and almost dies; police find some blood in the Fletcher-Norman's kitchen, plus they will also try to determine who are behind the many phone calls placed from different phones, in various locations in the vicinity of the crime scenes. Then gossip in the village blurs the picture. Or does it? Who could have wanted these women dead? And why?

I was a fan of Elizabeth Haynes even before she was published here in North America. Her first book, Into the Darkest Corner, had been available for about a month or so, in the UK, when a visitor at the House of Crime & Mystery decided I should read it. She sent me a copy across the Atlantic ocean and she said "Elizabeth Haynes is not very well-known yet, but I guarantee you she will soon". Maybe not her exact words, but something to that effect. She was right and I wish I could remember her name now to thank her properly.

Haynes then went on to publish two more books (Revenge of the Tide --or Dark Tide, in the US & Canada-- and Human Remains my favorite so far). These helped to prove that she was for real, and legitimately take her place in the crime fiction world. The three books are standalones and, although they share some similarities, are very different in many ways; you might enjoy one and then maybe dislike another one (but I'd really be surprised). One thing I can guarantee, they won't leave you indifferent. The themes --relationships, domestic abuse, solitude, extreme behaviours, etc.-- are intelligently treated and very much at the center of each book. The characters are poignant, complex and richly drawn; Haynes demonstrates a strength that is too often lacking in novels in general, which is strong characterization created with heartfelt sensitivity. She respects all of her characters and wants us to understand them, the 'good' as well as the 'bad' --even though they can't often be as easily categorized, living as they are in the grey zone in-between.

Back to the book that concerns us today, Under a Silent Moon. Haynes's fourth story is the start of a series starring DCI Louisa Smith. She is at the center of the investigation but the novel is all over the place (in a good way), presenting the reader with different point of views, as much from within the police department as from civilians who knew the victims in one way or another.

Two women are found dead, one evidently murdered while the other seems to have killed herself. They knew each other and lived in the same neighbourhood. Are the deaths related? Is there more than one killer? Why did they die on that same night "under a silent moon'?

Elizabeth Haynes here shows some of the qualities present in her three previous novels, but the characters are the real interest in this one. Relationships, attitudes, and work habits within the police department are interesting enough to want to know more about DCI Smith and the other detectives and cops; the other characters help to define who were the victims, but also to complicate the guessing game around the reasons for their violent deaths. One of the author's good ideas here is the use of police paperwork (witnesses statements, intelligence reports, etc.) that adds another dash of reality into the story.

Personally, I prefer to get to know the characters before they die; when a book starts off with victims I've never read about it keeps me a little too distant from the story. I don't feel involved. Of course, that's the way it happens most of the times with detectives in real life; hopefully they are not related to the victims, so they need to get to know them in order to find out how and why they died. Especially the 'why'.

In fiction, the writer's job is to make the mystery intriguing enough to grab the reader's attention. Then, in my case at least, the writer needs to get the reader to care for the victims by telling him (or even better, by showing him) who they were. Many readers of mysteries will enjoy the investigation and maybe find an added interest by trying to solve the case before the end of the book. Not me. The ensemble of characters who are running the story, and driving the intrigue forward towards its resolution is what hooks me. Fortunately, Haynes does it really well here; a good thing because I didn't care enough for her two victims. Plus, the mystery, while not being that obvious, wasn't very difficult to solve either. But Haynes's cast of characters is diverse, well-balanced and interesting; that's what kept me reading and why I am looking forward to reading her next novel.

Rating: 3 1/2 thumbprints (see my rating system in the Review Room).

And for other opinions than mine about Under a Silent Moon, visit the TLC Blog Tour website here.