DARKNESS ALL AROUND by Doug MAGEE (Review+Giveaway) 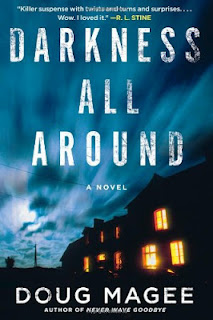 Never Wave Goodbye, Doug Magee’s first novel, was highly praised. Magee was even compared to the likes of Harlan Coben and Linwood Barclay. With his new book, Darkness All Around, being published in paperback format, Magee proves that he’s not a flash-in-the-pan thriller writer and that he needs to be taken seriously.

The story centers on Sean Collins, a man mostly known as a drunk who showed signs of violence, has disappeared from the small town of Braden (Pennsylvania) leaving behind his wife Risa and young son Kevin. A few days later, the dead body of Carol Sleazak, a good friend of theirs, had been found in the woods, brutally murdered with a machete. A man named G.G. Trask was arrested and, after he confessed, was convicted for the murder and sent to prison.

Ten years after his disappearance, Sean has now been declared legally dead and Risa is married to Alan Benson, a politician in the middle of a campaign in which he’s running for Congress. When all of a sudden Sean shows up in Braden, claiming that he’s the one who has killed Carol and wants to be arrested for it, no one is interested in believing his story. He is even forcefully kicked out of town by hired thugs.

No one wants to stir up the past: never mind the townspeople who’d hate to think that the wrong man could have been incarcerated; certainly not Benson who will do anything to dodge a possible scandal and secure his political career; and least of all the police who wouldn’t want their past work and decisions be scrutinized. And as in every small town, there are secrets that’d better be kept hidden.

Darkness All Around is a good, fast suspense that is enriched by the high level of emotions fueling its different protagonists: Kevin, the new star of Braden’s high-school football team, who seems to have inherited his biological father’s gene for violence; Risa, who never really believed Sean was dead, and now doesn’t believe he’s guilty, but she’s torn between being happy of his return and having to face the fact that he might be a killer; Alan, who’s priorities are his political career and the success of his son on the football field (in that order); Henry, the journalist who had covered the murder case of Carol and is still haunted by the vivid memory of her mutilated body, is now caught up in a case that gets bigger than he seems to be able to manage.

While seriously raising questions on subjects like flaws in the justice system, mental illness, alcoholism, and violence, Doug Magee keeps the tension at full speed right until the surprising, although not entirely satisfying, end. He convincingly takes the reader into the frenzy that hits the small town of Braden like an unpredictable tornado that turns everything upside down and leaves nothing and no one unchanged, reader included. This is a book that works as much on your brain as it does on your nerves.

UPDATE: The winner of a free copy of Darkness All Around is Carl Scott, of Lukeville (Arizona) US. Thank you to everyone who participated and thanks also to TLC Book Tours and Touchstone (Simon & Schuster).
For a chance to win a copy, send me your name and address before Friday, June 29th at noon (Montreal time) at housecrimyst@gmail.com. Open to residents of the US and Canada only, 18 years or older.