(This is part of a TLC Book Tour) 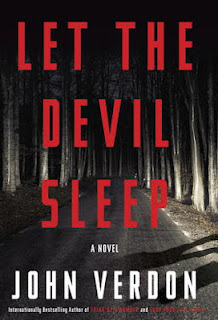 John Verdon’s third novel LET THE DEVIL SLEEP is his best one so far, which should be great news for fans of THINK OF A NUMBER and SHUT YOUR EYES TIGHT.  But what I prefer about it might not be what most of you would enjoy and look forward to. If what you enjoyed about the first two books were the plot twists and clever intrigues, you won’t be disappointed; maybe just a little bit less challenged by it --especially if you like to guess and solve everything before the last page. Before I explain and let you know what I’ve been enjoying in Verdon’s books –and especially in this one—here’s what the new book is about.

LET THE DEVIL SLEEP starts with former Homicide Detective Dave Gurney recovering, at home, from injuries sustained at the end of SHUT YOUR EYES TIGHT. But as the physical recovery is on the right track, it’s the psychological healing that seems to be slow, dragging Gurney into a maelstrom of conflicting emotions about everything and anything. Because he’s starting to get bored (and one might say depressed), Gurney accepts a seemingly easy ‘assignment’, which is to act as counsel for a TV-documentary about a series of unsolved murders that happened ten years ago, and were known as The Good Shepherd case.

Never fully comfortable in his undefined role during research for the program, Gurney occupies himself by looking into the murder files. His interest is piqued when he realizes that some aspects have been overlooked and that the focus might have been on the wrong details, clues, and motive. As he digs deeper to learn more from the investigation, not everyone is eager to help out; but when minor threats become serious menaces that are followed by life-threatening incidents, Gurney’s mind starts grinding into full gear. He knows now that the Good Shepherd is still around, and probably much closer than everyone else thinks.

What I’ve been enjoying most in Verdon’s books, so far, is his central character, Dave Gurney. Yes, the plots in the previous books were impressive and challenging and intelligent, but to me, John Verdon’s achievement is in creating an original character for crime/thriller literature. No, he’s not so original that he’s entirely different than other detectives, but Gurney possesses something that every interesting and complex character should possess: intelligence as well as emotions –without the usual clichés. Gurney faces great intellectual challenges, especially in LET THE DEVIL SLEEP, but he also needs to confront his own psychological conflicts. To me, these were almost as interesting as the main plot because I wanted to know how his sometimes uncontrollable emotions and troubled mind would hinder or help him solve the two cases in front of him: the one involving the Good Shepherd, and his own personal recovery. Where Gurney used to be in control of his thought process, and demonstrated a calm demeanor, he now forgets things and sometimes loses control of his emotions.

At the end of the previous book, Gurney had been shot and seriously injured. Logically, John Verdon now takes Gurney into PTSD territory and he does it convincingly by making the process as much external as internal for Gurney. I was a little surprised that it took a while before anyone mentioned PTSD to Gurney when it was obvious he was acting impulsively, a bit erratically, and sometimes with abruptness. None of these traits would have described him before. His wife, Madeleine, who is Gurney’s soul mate in every aspect, should have been the one to notice it and to tell him, even though she tentatively hints at it once or twice.

Aside from that, I found LET THE DEVIL SLEEP to be a very complete story, combining aspects of a good mystery, with some great suspenseful scenes, excellent timing, and some well-defined characters that bring a certain richness in the dialogues and all through their interactions.

LET THE DEVIL SLEEP is John Verdon's best book so far. Focusing as much on the psychological roller-coaster ride that Gurney goes through while he tries to unmask the Good Shepherd was a brilliant idea. It will be interesting to see in which direction John Verdon will take his characters next, especially Dave Gurney. 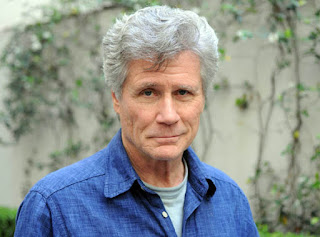 #1— For those who haven’t read your books yet, can you describe NYPD’s Homicide Detective Dave Gurney and how he’s evolved since the first book, Think of a Number?

J.V.—In the first book, Dave was still new to the experience of retiring from his high-flying NYPD career and moving to the mountains of upstate New York. Tensions were beginning to arise from the gap between his wife Madeleine’s hopes for their new life in the country and Dave’s reluctance to let go of his obsessive focus on crime-solving. Through the dramatic events of Think of a Number and Shut Your Eyes Tight, however, Dave comes to rely increasingly on Madeleine’s instincts and insights, and she moves closer to accepting his unique combination of intellectual strengths and emotional limitations. In Let the Devil Sleep, Dave is still a logic-driven, introspective puzzle-solver of the first order, but he is coming to appreciate more than ever before how fortunate he is to have Madeleine in his life.

#2—What do you need to know about the plot and the characters before you sit down and start writing a novel?

J.V.—That’s a surprisingly difficult question to answer. The fact is, there is no single point at which I “sit down and start writing”. For example, I’m working now on my fourth Dave Gurney novel. The work consists of gathering together notes I’ve made from time to time over the past couple of years; continually scribbling new notes on the index cards I carry with me wherever I go; drawing structural diagrams on yellow pads, illustrating thematic and plot development points; writing brief character backstories and physical descriptions.  These notes of mine become more and more voluminous. They include pages of dialog, detailed descriptions of key scenes, inner monologues, character quirks and tones of voice. Once I’ve accumulated three or four hundred index-card and yellow-pad pages of plot notes, character notes, and partial scenes, I start to organize all that material into a three-act dramatic structure. I suppose you could say that I then “start writing”. Of course, a lot of writing has already been done. But that’s when I sit down at my computer, open my word processor, and type “Chapter One” at the top of the page. At that point I know quite a lot about the characters and enough about the plot to feel confident that I have the essential ingredients of a novel. During the subsequent writing process -- the creation of a coherent first draft -- the plot tends to evolve further from my original thoughts than do the characters. That’s because, the more I write, the more the characters take over. By the final chapters, my sense of the process is that I have become a sort of stenographer, witnessing and writing down what the characters themselves decide to say and do. How the story ends is up to them.

#3—What are your biggest challenges while writing a novel? Is it characterization, plotting, atmosphere, dialogue, etc, and how is it challenging?

J.V.—What matters most to me is emotional reality -- having a scene come to life. It’s hard to say exactly how that spark of life arises. It seems to be a combination of all the elements you mention in your question. So I would say that the great challenge doesn’t lie in any one of them, it lies in combining them believably and vividly -- combining them in a way that the reader feels that he or she is witnessing something real. There’s no formula for achieving that elusive but all-important effect. It depends on the quality of one’s imagination at the moment and the authenticity of one’s emotional connection to the imagined scene.

#4—What mostly helped shape the writer that you are today? Is it specific experiences, events, people, etc?

J.V.—I write complex mystery-thrillers. What made me that sort of writer? That’s a big question to which I can offer only a small answer. Mystery stories have always provided my most pleasurable reading experiences. I love the genre, and at some point in my reading life I came to understand it from a structural point of view -- the basic blueprint. It was clear to me how detective novels were put together, and the structure fascinated me. One day my wife suggested that I try to convert that fascination into a novel of my own. The result was Think of a Number. That experience led to Shut Your Eyes Tight and most recently to Let the Devil Sleep.

#5— Maybe it’s too early to ask you this, but is it your intention to exclusively continue writing Dave Gurney stories or do you have plans for a stand-alone at some point, or another series?

J.V.—Right now, I want to continue with Dave Gurney, because I think he has room to grow. Also, I find not only the genre, but the Dave Gurney slice of it, to be naturally accommodating to the way I think and the kind of subjects I’m interested in writing about.  Someday I may feel differently, but, as I mentioned earlier, I’m now well into the creation of the fourth Gurney novel. And I’m dropping occasional notes for the fifth into an envelope in my desk drawer.