A DETAILED MAN by David SWINSON 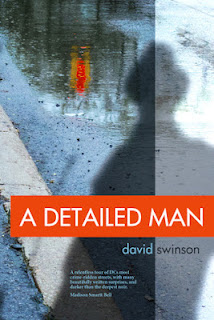 A former member of the Police Force, be it a detective, a cop, a blood spatter expert, or anyone else who used to own a badge doesn’t necessarily possess what it takes to write a good crime novel. Just because that person has an insider’s knowledge and many years of experience doesn’t mean that it will magically produce a great book. The writing aspect is often overlooked and we’ve all read bad novels written by ex-cops.

David Swinson is a former detective with over 15 years of experience. Fortunately for us, he also writes well. Swinson’s first novel is a convincing and entertaining work that many experienced writers in the crime fiction genre would be proud to have written themselves. The voice of the narrator, Ezra Simeon, pulled me into the story right from the first few lines almost as if it was told to me privately, maybe at some pub while having a drink or two.

Simeon is a detective with the Washington PD. When the story begins, we learn that he suffers from Bell’s palsy, a temporary disorder that partially paralyses the left side of his face. Back from a short medical leave, and still very much self-conscious of his appearance, he is assigned to the Cold Case department where he thinks he’ll probably serve a few years before retiring. Exactly the peace and quiet he needs right now.

But when his friend and colleague, detective Scanns, dies unexpectedly, Simeon is reassigned to homicide and given Scanns’s case load. Simeon soon realizes that one of his cold cases might well be related to a murder that Scanns was investigating. From then on, we are with Simeon every step of the way through the investigation as he follows different leads, gets to deal with the politics of the job with his superiors, coworkers and lawyers, while his life outside the cop shop is very minimal. When the main suspect is found dead from an apparent suicide, Simeon starts looking more closely at one of the suspect’s childhood friends; but the case becomes more complicated.

Swinson’s experience obviously helps with the accuracy of all the technical details, but one of his biggest strengths is in creating the inner turmoil and psychology of detective Simeon. He has most of what is needed in a series character: drive and determination to see his cases to the end; care and empathy for the victims and their families; and just enough weaknesses to be believable without falling into the parody of the tormented detective. Simeon might seem at times only one bad day or just one bad luck away from depression, but he is far from that.

Detective Simeon reminds me a lot of Harry Bosch, while Swinson’s attention to details about police work and the technicalities and politics of it all is not very far from the work of Michael Connelly. Swinson doesn’t yet masters Connelly’s strength in building an airtight plot, but he’s not that far away either. While Simeon at times seems to be living in his own complex and inner world, it’s his interactions with the characters that cross his path during the investigations or in his civilian life that help us understand the man behind the detective.

The book itself suffers from a very average editing --a lot of typos and bad punctuation, a few repetitive sentences or expressions-- but also two long paragraphs that appear almost word for word on two different pages*. Fortunately, the story and the writing are strong enough to overlook these mistakes and not hold it against Swinson.

A very strong debut that I encourage you to read.

Go visit David Swinson's website to learn more about him, and for a special promotion with Amazon until April 15.

* I've been told that my copy of the book was an earlier print run intended as advance reader's edition and that the mistakes have been corrected in following print runs. Unfortunately, there was no indication anywhere on (or in) the book that this was a galley or ARC. In the end, typos or not, the book is still very good.