LIVE BY NIGHT by Dennis LEHANE (a review) 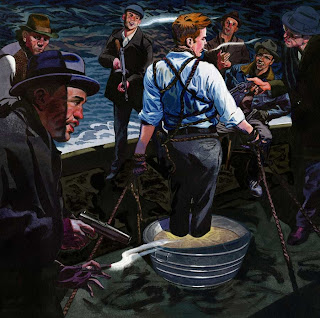 'Live by Night' illustration by Jeffrey Smith (with kind permission)
My Dad would have been 81 today; he lived only 60 years. This review is for him, because it was the kind of books he enjoyed and I know he would have been a fan of Dennis Lehane. When I was 12, he introduced me to George Simenon, James M. Cain, and Raymond Chandler, his favourite writers. Here's to you, Dad.
Dennis Lehane excels in the historical genre and he seems to be really comfortable doing it. I certainly enjoy reading them. It started with Shutter Island, a gothic psychological suspense taking place in 1954 (a mix of Patrick McGrath's novel Spider for its mental maelstrom, and of Boileau-Narcejac's The Living and the Dead for its dizzying suspense), then it was The Given Day, arguably Lehane's best novel (I put it in a tie with Mystic River, the book equivalent to a no-hitter in baseball, very close to a perfect game).
Now it is Live by Night, in which the main protagonist is Joe Coughlin, younger brother of Danny, the cop we follow through The Given Day which took place just a few years earlier, mainly in Boston and Tulsa. Joe has not followed in the footsteps of his brothers (the other one is a lawyer) and father, police captain Thomas Coughlin. He started out doing small mischiefs but rapidly graduated to bigger jobs for mobsters who basically run Boston.
It is the roaring '20s, prohibition time and profitable times. But after a heist gone very wrong –two cops and an accomplice of Joe have died—Joe is sentenced to 10 years in prison. Inside, he makes the right connections at the right time; so when he gets out, a good job awaits. Joe ends up in Florida, managing the rum running business while having to fight off the competition, finding the right allies (some old friends that can’t all be trusted, new friends and enemies that are not always what they seem), and making sure he doesn’t become too comfortable and complacent --a huge mistake in his line of work where life expectancy doesn’t allow many to retire into old age.
We'll follow Joe through his life changing encounters and opportunities, his good decisions as well as his costly mistakes. After all, he's only human.
Lehane is so good at telling stories, at putting the focus on his characters and on the major events they have to live through, that we tend to overlook the richness and beauty of his writing; here’s a writer who is fully aware of his abilities and strengths but who doesn’t stop to gaze in the mirror and let himself fall into self-congratulation. We notice it often by his use of humour; sometimes during intense scenes, proving that life can be funny at odd moments --even when death is knocking at the door.
Live by Night is a story of love, of family, of frienship but it is also a tale about those who chose the dark path of life, knowing it would probably be a shotcut to death but preferring to live intensely like an exploding bullet going through flesh and bones, expecting that it would become a bullet destined for their own flesh and bones.
When I open a Lehane book, I expect to meet interesting characters that are defined by events in their past, characters who will go through moral dilemmas, social changes, emotional battles, and other defining moments; these characters will end their journey as different human beings with a slightly, or entirely, different past behind them; and, as is the case with characters from Live By Night, when the story on the page ends, I always end up wanting to follow them a little farther into their future. Those who are still alive, of course.

I give Live by Night 4 thumbprints out of a possible 5; the book won the Edgar Award for Best Crime Novel of 2012. It fully deserved it, but I think The Given Day (2008) was even better (4 1/2 thumbprints); surprisingly, it didn't receive a nomination at the Edgars at the time.

I also recommend you visit Jeffrey Smith's website. He's the illustator of the image at the top of this review, which he did for Playboy Magazine when they ran an excerpt of Live by Night.
He has great stuff on his website, some for stories by Ellroy, Pelecanos, Billingham, etc.

Thanks for stopping by The House.

Jacques
August 18th, 2013
P.S.: instead of rating books with thumbs up or thumbs down, I give them thumbprints.

THE ABOMINATION by Jonathan HOLT (a review) 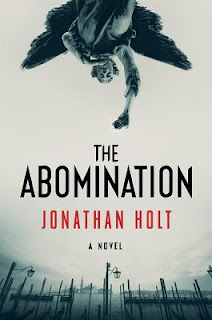 (guest reviewer)
The Abomination is book one of the Carnivia Trilogy. A woman dressed as a priestess is found dead on a beach in Venice, Italy. Kat Tapo, a Captain in the carabinieri, is trying to keep her place in a male dominated profession while working this murder case (her first one) with her boss, a man named Aldo.
Holly Bolland, 2nd Lieutenant of the US Army, is based in Italy and charged with investigating a Croatian General regarding his role in his native country's civil war. Bolland's investigation will soon lead her to cross paths with Kat and Aldo.
Carnivia is a huge online world, modeled on Venice, where anyone can create an avatar and have complete privacy (in the Venetian tradition, they all wear masks). This made me think of Michael Crichton’s books, especially Disclosure.


This is a thriller with strong feminist elements: the abuse of women is a strong thread throughout the story, as are the forced prostitution of Croatian women and the fate of women during the Balkan War. The law against the ordination of women by the Church is also a major theme in the story.
There are conspiracies galore in this book, with agents and double agents and maybe even a triple agent (I lost track a little bit there!). As one of the early reviews mentioned, the story "piles the mysteries and twists one on top of the other", but all in a cohesive and well written way. The heroes of the story are fighting an unholy cabal of the CIA, the Church, the State, and the Mafia, so the powers against them are formidable.
One other note; having read Amanda Knox’s story, and having listened to some of the news surrounding her case, I think the author paints an interesting portrait of the prosecutor of the case in The Abomination; one that would lend credence to Amanda Knox’s story that the case against her was all made up.
text by L'Étranger
guest reviewer 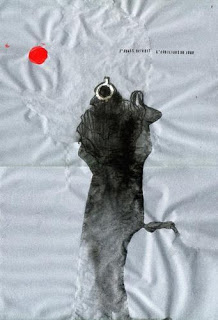