THE ACCIDENT by Linwood BARCLAY 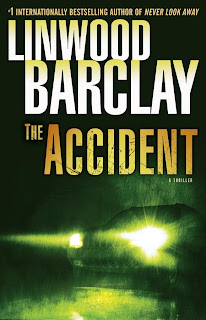 I’ll be honest here and confess that I haven’t read any of Linwood Barclay's books since  “Too Close to Home”. I have copies of “Fear the Worst” and “Never Look Away”, the novels that followed, but just never took the time to get to them. I will now. “The Accident” convinced me that I wasn’t paying enough attention to Linwood Barclay.

Glen Garber is an average-Joe trying to keep his home-building company afloat through the tempest of recession. Then his wife Sheila dies and authorities claim that she’s responsible for the strange car accident in which two other persons lost their lives. At first, Garber hovers between anger and grief but he soon realises that there is a complex mystery surrounding his wife’s demise. Other people might know more than they're letting on about it.

Garber goes around town trying to uncover clues about what is really going on and who might be responsible for other deaths too. As if it was not enough, someone shoots a bullet through his 8-year old daughter's bedroom window. Nothing will stop Garber now from getting to the truth.

I started reading “The Accident” one night when I needed to catch up on sleep more than on reading.  I thought I’d read a chapter or two then it’d be lights out. Yeah, right. The light stayed on and I fell down through the pages into Barclayland while Garber found himself falling out-of-control through a complex web of deception and deadly secrets. Barclay not only masters the art of high intensity plotting, he also paces it all to near perfection. His characters are so real and every aspect of the story so believable that after reading this “suburban noir” thrill-ride you will start wondering about what might be secretly going on in your own community.