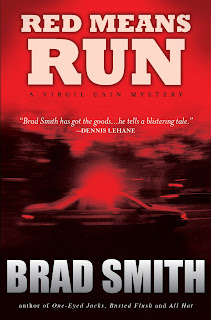 Brad Smith has already proven his talent in previous books, especially in ALL HAT and BUSTED FLUSH, two of my favourites of his. With his new novel, RED MEANS RUN (published today, January 10th) Smith elevates his game another notch and will hopefully get all the attention he deserves.

Virgil Cain is a former baseball player turned gentleman farmer who now lives in upstate New York, not far from the Canadian border his native country. Life hasn’t always been good for Cain who’s had previous dealings with the law and who is recently widowed. Now, while taking care of a few horses, raising cattle and cutting hay, Virgil lives one day at a time.

The quiet is suddenly broken when Virgil becomes the prime suspect of the murder of a big shot lawyer named Mickey Dupree; the same Dupree who has successfully defended a man accused of killing Virgil’s wife. The police don’t seem interested in following other leads after learning that Cain has been heard saying “somebody ought to blow Mickey Dupree’s head off” in a bar. Virgil is arrested, thrown in jail and officially accused of the murder.

Sensing that he doesn’t stand much chance of convincing anyone of his innocence, Virgil decides he’ll have to find the killer on his own. With a little luck and some wits, Virgil escapes from the old jail but soon after two more murders are committed. Still the only suspect, Virgil enters a cat and mouse game with the lead detective, Claire Marchand. It could be reminiscent of ‘The Fugitive’ if not for some chemistry and sexual tension between Cain and Marchand. Virgil realises that Claire is the only one who might be able to help him, but he needs to convince her first. On the other hand, while she senses that it’s possible he might not be guilty, she still wants to do her job. And that’s to find him and to bring him in.

In “Red Means Run”, Brad Smith brings to the genre a great cast of complex characters who are caught at defining moments of their lives, as if depicted on a Norman Rockwell or Grant Wood canvas, if these painters had decided to show the darker side of American rural life. Smith’s characters are all confronted with decisions to take, and for most of them, their choices will bring drastic consequences. These characters are alive on the page thanks to great dialogues, as in this example:

“(…) I noticed an assault weapon in the dining room and a semi-automatic on the kitchen counter. I assume they are all property of the deceased but you know what assuming can do.”
“Lots of guns,” Julie said. “What the hell was he expecting?”
“This, I’m guessing,” Claire said. “But probably with a different outcome.”
And in this one:
“You watch reality TV?”
“I watch baseball,” Virgil said. “And the news. The weather occasionally but it tends to piss me off.”
“I hate reality TV,” Buddy said. “Sometimes I think it’s the worst fucking thing ever to happen to this country. Nothing worth watching anymore. So I’m bored most of the time and I hate being bored. But you, you’re entertaining as hell. I don’t know what the fuck you’re up to or what you’re going to do next, but I’m going to keep watching.”

The story moves at a steady pace as you get the omniscient point of view into the different plot lines. You'll end up caring more about the characters than about the actual mystery of who kills. But that's a good thing because the interactions between Claire and Virgil, Suzanne and Jane, and their motivations is what really drives this story. If you like ‘country noir’, as Brad Smith’s books have been categorized in the past, “Red Means Run” will satisfy you like a horse ride in the quiet of a warm morning mist, or like a cold beer after a long day working in the alfalfa field. The New Year has just started and Brad Smith already raises the bar for others.

To learn a little bit more about Brad Smith and “Red Means Run”, here’s a short Q&A I did with him. 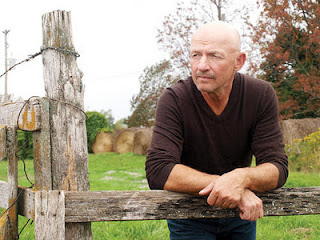 HoCaM-- “Red Means Run” is your 6th novel; what makes Virgil Cain the right character for you to start a series?

Brad Smith--He just seems like a character with staying power. I like the idea of an ex-athlete trying to figure out what to do with the rest of his life. And – as a minor league ballplayer – Virgil Cain never made enough money to retire, so he needs to find a vocation that will support him. He stumbles into farming, and is quite surprised to find that he likes it. The other thing about him is that he’s very private, and that makes it all the more interesting when he gets dragged into situations he could quite happily live without.  And he’s also happily ignorant of the information age – he doesn’t own a cell phone, or a computer – which makes him a throwback.

HoCaM-- When did you realize, in the writing process, that you were entering series territory?

Brad Smith--I have been sitting on the idea of the second book – Crow’s Landing – for a while and when I sat down to write it, it came quite naturally to me that Virgil Cain would be a good fit. It’s about a guy who, while out fishing, snags a steel cylinder full of pure cocaine. Virgil lives near the Hudson River, and – as someone who seems to be very good at finding trouble, through no fault of his own  - it occurred to me that Virgil was the guy.

HoCaM-- The title of the book comes from the song “Powderfinger” by Neil Young (that he originally wrote for Lynyrd Skynyrd). “Red means run, son, …” The lyrics are pretty self-explanatory in the story they tell, and the beginning of your novel shares similarities with the song (and with its main theme). How much did the song inspire the book; was it the spark for the idea of the story or did it come into the mix later on?

Brad Smith-- Hey – I never knew Neil wrote that for Skynyrd! I do know, of course, that they gave him a shot in Sweet Home Alabama (“I hope Neil Young will remember, southern man don’t need him around anyhow”)
I wouldn’t say that the song actually inspired the book, but it was definitely in the mix all along. The book is infused with a number of musical elements – both good and bad – and Powderfinger always, to me, represented the good. It helps bring out the character of Virgil’s late wife, whom we never actually get to meet, so it was important to me that she be connected to something pure and honest. And Powderfinger fits the bill.

HoCaM-- In “Red Means Run”, most of the marriages are money-oriented more than built on love and intimacy. These characters are either divorced or unhappily married or they just don’t care anymore. On the other hand, even with the odds heavily against them, Virgil and Claire connect on many levels. They are the driving force at the center of the book; to me, they became more interesting than the murder mystery itself (even though I wanted to know how it would all be solved). Can you talk about how you see these two characters and how they evolved in your head and on the page ?

Brad Smith-- Thank you. I think that the characters are always more interesting than the mystery and that’s something I strive for. First of all, Virgil and Claire are the smartest people in the book (although Buddy Townes is no slouch) and I think that makes them worthy adversaries. Secondly, the circumstances of their meeting puts them in opposition, which makes the fact that they are very attracted to each other even more interesting. Claire, in particular, has to restrain herself, as she knows her job is to lock Virgil up, possibly for the rest of his life. Virgil is more openly attracted to Claire, at first on a purely physical level (“she’s got great legs”) but then on an intellectual level, once he gets to know her. And even though he senses that she’s the one who might run him to ground, that doesn’t diminish his attraction. He also suspects that she might be smarter than him…and that makes him nervous. As it should.

HoCaM-- One aspect of your books that I enjoy is character-development; in “Red Means Run”, you’ve created many strong female characters (Claire, Suzanne, Mary, Jane, etc.) who change through the course of the story; they are determined and they know what they want in life –and how to get it. They also make interactions between characters much more lively and interesting because they are usually not passive. If they are passive, it’s for a good reason but they take action when it counts. How different (and challenging) is it to create believable female characters, especially when you have more than one or two and you want them to have different personalities?

Brad Smith-- Interesting that you should ask that. I knew all along exactly who Claire was – smart, sexy, slightly damaged, but extremely good at her job. And Mary Nelson was easy too – I like the notion of a senior citizen (she’s 70-something) who is a senior in name only. She’s feisty, sharp, idealistic and does not suffer fools gladly. However, when I wrote the first draft of the book, I purposefully made Jane and Suzanne quite similar. They both ran, both were fitness enthusiasts. I showed the draft to my good friend Jen Barclay, who suggested that it wasn’t working. So I went back and re-worked Suzanne – made her a drinker, a pot smoker, a hedonist who would rather eat thorns than go for a run. And it seemed to work.

HoCaM-- You’ve mentioned that the next book, “Crow’s Landing”, is another Virgil Cain story. What can you reveal about it?

Brad Smith-- Yes, it’s another Virgil Cain book. This time Virgil’s out fishing for striped bass on the Hudson River and with his anchor he hooks a steel cylinder containing a couple million dollars’ worth of pure cocaine (the lost cylinder is based on a true story). A dirty cop seizes the cylinder, along with Virgil’s boat, and soon he is pursuing - and being pursued by - drug dealers, crooked cops, and a crazy Russian dealer with a deadly cowboy fixation.

Other Brad Smith’s titles are: ALL HAT, BIG MAN COMING DOWN THE ROAD, BUSTED FLUSH, ONE-EYED JACK, and RISES A MORAL MAN.


Here’s what other writers have had to say about Brad’s books:

“Brad Smith has got the goods –he’s funny, poignant, evocative, and he tells a blistering tale. A writer to watch, a comet on the horizon.”  --Dennis Lehane
“…Dashiel Hammett meets Hank Williams meets James Lee Burke…” –Ray Robertson
“…a writer with lots of skills, lots of heart, lots of brain…” –Richard Russo

Thank you to Loretta Eldridge, of Simon & Schuster Canada, for including The House of Crime & Mystery in this blog tour.