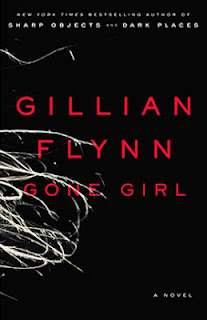 (If you've read this post before, just scroll down where the UPDATE starts).

Today the House of Crime & Mystery is part of Gillian Flynn’s blog tour for the promotion of her new (and third) novel “GONE GIRL” (Crown Publishers/Random House). I had sent five questions for a Q&A with the author but I was told she was too busy promoting her book at the moment. I thought a Q&A along with a review was part of promotion but I also knew that I could/should have sent the questions sooner and it was part of the problem. So this post will be part review (of Gillian Flynn's book) and part true story (mine, about being busy). And there's also a giveaway for a free copy of GONE GIRL (if that's all you're interested in, just scroll down to the end of the post).

When I was approached to participate in this blog tour, I immediately said yes because, even though I had not read Flynn’s previous books “SHARP OBJECTS” and “DARK PLACES”, I was aware of the great reviews that she had received for both, and of endorsements and blurbs from writers like Stephen King, Val McDermid, and Laura Lippman, to name only a few. These writers are among my favourites so I had purchased “DARK PLACES” solely based on these recommendations. Problem is, I just never got to reading it because my Tower of Pisa--of books to read--keeps growing at an alarming rate. (Unlike the real Tower of Pisa, which is constantly monitored for potential risks, mine is dangerously defying gravity).

Two weeks ago, as I was just starting to read "GONE GIRL", torrential rains (3 inches fell in less than 20 minutes) caused the city's sewers to overflow and my house (garage and basement) were flooded. One moment I'm sitting down, reading a book, with thunder in the distance and dark clouds coming fast; 30 minutes later I'm standing in my basement with water almost to my knees, looking at books floating from one bookshelf to another, a Stephen King's paperback of IT ("we all float down here") bumped into my right shin while a signed copy of Ken Bruen's LONDON BOULEVARD gets stuck between my two typewriters (a grey Underwood and a black Remington). The divine intervention of two good neighbours with a pump and a super-vac helped us get the water out of the house (it took six hours). It could have been a lot worse and I know people who've had 4 feet of water in their house; compared to the six inches we got, I think we were lucky. Although I did lose over 300 books, a half-dozen of those were signed and limited editions (some pics further down).

You can imagine how hectic it has been since; I haven’t had much time to read and now I’m only halfway through a book I’m supposed to review today. I didn’t want to cancel my review because “GONE GIRL” is a hell of a good story. So I decided to write a short review of the first half of the book, and in a few days I’ll update it and announce the winner of the giveaway.

When I started reading “GONE GIRL” I very quickly realized why Gillian Flynn receives so much attention and praises. Her writing is assured, her style flawless and sharp; her characters are so well defined and recognizable that you know they could be living right next door or somewhere down the street, either in a big city or a small town. They are real people and one of Flynn’s strength is to realistically get in the head of a male character. We often hear that male writers are not always getting it right when it comes to writing from a woman’s perspective; well here’s the truth: I find that many female writers also don’t “get us” right. But not Gillian Flynn. The world she creates is the real world; you’re pulled into the story from the start because every single detail feels taken from your everyday life or from someone you know.

And that's all after reading only 40 pages or so. Then you get deeper into the plot and it feels even more real, as if it's happening close to you. The first-person narration is definitely used to get the reader more involved and there Flynn excels also.

OK, so you wanna know what it’s about, I guess. It’s an intense and scary (in many ways) look inside a marriage. Guy named Nick Dunne is married to gal named Amy Elliott. On the day of their 5-year anniversary, Nick is at work and receives a call from one of his neighbours “Nicky, I just thought you should know…your door is wide open, and that cat of yours is outside. It isn’t supposed to be, right?”

No it’s not, so Nick goes home; Amy is not there.

From being in Nick's head, the reader already knows that this marriage is not going well, mostly because Nick doesn’t sound happy --and maybe a bit weird too, especially when he says "There's something disturbing about recalling a warm memory and feeling utterly cold." Flynn switches her storytelling between both Nick in real time, and Amy from her diary entries; these entries start at the beginning of their relationship.

As you follow Nick's life while Amy has gone missing, you read excerpts from her diary; the contrast between his present unhappy marriage and her storytelling of falling in love and their perfect match gives a stronger sense that something is really awry now. Flynn exploits this brilliantly by throwing in unexpected sentences here and there that unbalances the reader, creating strong discomfort. While Nick is questioned by two detectives, he thinks "It was my fifth lie to the police. I was just starting." And of course, the reader immediately thinks "well, what were the first four?" Later during the questioning by the detectives, Nick says to himself "This was my eleventh lie."

Gillian Flynn expertly manipulates the reader (me) by having him constantly change his opinion about Nick depending on what he says, thinks, does, or how he acts, reacts, or stays passive. I've not often read a book where I've felt so absorbed and uncomfortable at the same time. The underlying creepiness and unsettling atmosphere coming off the page are as intense and as close as possible to experiencing it in real life.
Now I'll go finish reading it and will come back to tell you more about it. But I can definitely recommend it as it is one of the best books I've read in the past three years.
********************************
So here's my UPDATE after having finished reading the book: Wow! This is a story about a marriage gone insanely wrong. It is about two people who are either very wrong for each other, or perfectly matched; you'll have to decide. But I warn you, there are no wrong answers; I'm tempted to say no right ones either. Gillian Flynn unspools a clever and intricate plot that is both machiavellian and pure genius in its depiction of a modern-day relationship. Being careful not to spoil anything to those who haven't read the book yet, I'll say this: when you've finished reading GONE GIRL, Michael Douglas and Glenn Close's relationship in "Fatal Attraction" will seem like a great love story to you.

While all clues point towards Nick, and as his lies become apparent to the police, he becomes the main suspect in the disappearance of his wife. His nonchalant, almost bored attitude seem very suspicious to both the media and the public opinion, especially since "the husband is almost always guilty". To deflect some of that tension, Gillian Flynn takes us deep into the couple's married life to show Nick and Amy at their best and worst. We learn about the loss of their jobs, about Amy's unhappiness regarding their move from New York City to a rented McMansion on the Mississippi, about the money problems, the question of having kids, and of secrets from before they knew each other.

Gillian Flynn's sense of timing is as perfect as if she is building an enormous clock --or a time-machine-- that she uncovers one or two pieces at a time, while revealing Nick and Amy's day to day story. Flynn brings new developments exactly when you don't expect them, winding the story back in the opposite direction of where you thought it was heading, while the plot still keeps going forward. Flynn does that often but you follow willingly because it is always believable --you can still hear the tick-tock of the clock in the background, and the grinding of the time-machine-- and her moves are backed-up by elements she has spread throughout the pages (almost nonchalantly, you think) and everything clicks together until you finally see the whole work. Or maybe not.

Another aspect that proves Flynn's total control of the story is her ambidextrous talent for both male and female points of view, especially with the characters inner-dialogues which are a major part of the novel. She is as credible inside Nick's head as she is inside Amy's; not only that, but their changing moods and their actions are rendered as convincingly as any great actors could play them. Speaking of which, these two characters are dream roles for any talented actors who play within a wide range of emotions.

And of course, GONE GIRL would be a terrific movie in the right director's hands. But read the book first, it is much better than any movie adaptation could be.

***********************
UPDATE: A copy of GONE GIRL will be shipped to Keith Rawson of Gilbert, AZ (US). Thank you to everyone who participated. This was a very popular giveaway. I guess Gillian Flynn has many fans.
GIVEAWAY:  If you want a chance to win a copy of Gillian FLYNN's GONE GIRL, you need to send me your name and address at housecrimyst@gmail.com but you also need to be 18 years or older. Deadline is Monday, June 18th at noon (Montreal Time). Open to residents of the US and Canada only. Bonne chance!
Thank you TLC Book Tours for providing this free book.

And now, some pics from the flood. 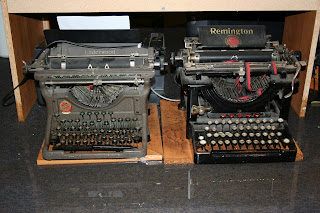 The two typewriters previously mentioned, when water was almost all pumped out. 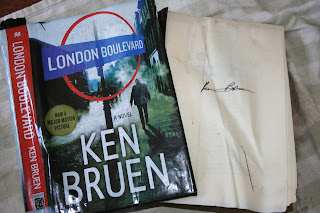 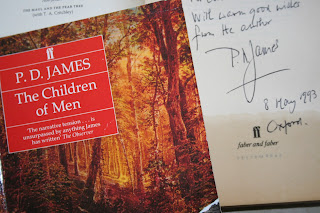 Signed in Oxford, The Children of Men by P.D. James.